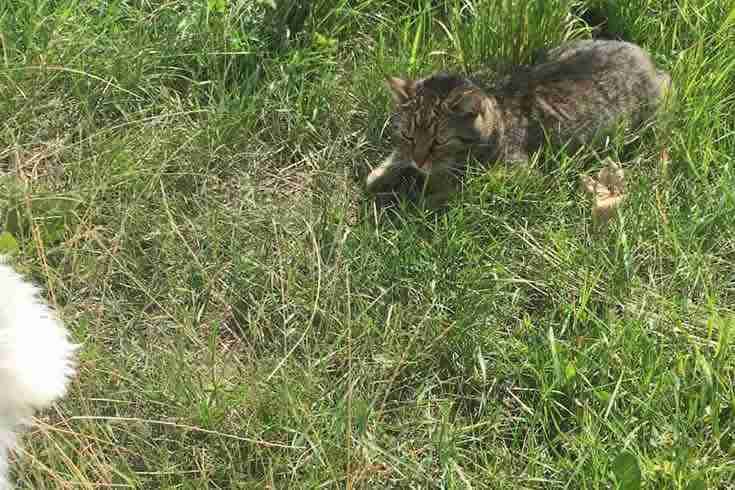 Are Westies Good With Cats?

Westies are energetic and intelligent dogs that make great companions. Nonetheless, a common concern pet owners have is whether Westies are good with cats and whether they can peacefully live together without causing too much trouble.

Westies are good with cats under specific conditions: both animals are familiar with each other, the Westie is trained properly, and both animals feel comfortable around dogs and cats alike. To guarantee a successful relationship, both animals should be raised together at a younger age.

Fortunately, there are actionable steps you can take to ensure Westies get along with cats. With some careful preparation, you will not need to worry about your Westie putting your cat in danger or vice versa. Read more to learn about whether Westies are good with cats and what you can do to establish a peaceful home for your pets.

Are Westies Good With Cats?

Like many other dogs, Westies are not naturally good with cats, but they can be with enough time and patience. Since Westies instinctually like to pursue small rodents and prey, this can be problematic at times when Westies and cats are together. This is especially true if a Westie comes across an unfamiliar, smaller cat and is not accustomed to the company of cats.

That is why you need to take certain measures to avoid some of the pitfalls commonly associated with cats and dogs. Overcoming the prey-drive of a Westie is another obstacle you will have to face when trying to introduce a Westie to a cat. But don’t worry, there are ways around these obstacles.

Here are some steps you can take to promote a healthy relationship between Westies and cats:

In many cases, you will not need to do all of these things to build a strong bond between Westies and cats. For example, if you were only to raise a Westie and cat together at a young age, then this would guarantee that the Westie would get along with the cat. However, if you are unable to introduce a Westie and a cat early in their lives, then you can go through the other steps to achieve the same result.

Raise Westies and Cats Together

By introducing Westies to cats early, Westies treat cats less like prey and more like potential companions. This familiarity between both animals builds confidence and trust, which can eventually develop into an amicable relationship.

Since Westies have a strong prey-drive, most of the time, they only chase fearful cats that run away when approached by dogs. If a cat is calm and collected around a Westie, this drastically reduces the likelihood that the Westie will try to pursue the cat like a prey animal.

In the beginning, your Westie will need to be put on a leash to stop potential conflict and allow the Westie to carefully get to know your cat. Inevitably, this will require your supervision as the owner to hold on to the leash and observe how the Westie and cat react to each other.

Dogs and cats are territorial animals, so dividing up specific areas for Westies and cats is important, especially when both animals are still getting familiar with each other. The easiest way to do this is by fencing off areas in your home where the Westie and cat can be around each other without jeopardizing their safety.

Later on, once a Westie and cat are comfortable enough, you can start removing some of the fencing and other boundaries between both animals. However, make sure to place your cat’s litter box somewhere that is inaccessible to the Westie, as the Westie can tamper with the litter box and may ingest the fecal matter inside. Well, what can I say, stuff happens, westies are westies:)

Train Your Westie With Psychology

B.F. Skinner contributed much to the world of behavioral psychology by experimenting with rats. From his experiments, the concept of positive reinforcement emerged: the idea that you can reinforce specific behaviors by rewarding the behavior with a positive stimulus. This concept is useful when training your Westie to get along with cats since you can incentivize good behavior.

Here is what positive reinforcement looks like when training a Westie to get along with cats:

As you can see, a positive stimulus like a dog treat effectively teaches Westies to behave around cats. The most important thing is to be consistent and always reward Westies for good behavior around cats. The opposite of this is also true, so do not reward your Westie for bad behavior. Keep in mind that you can use positive reinforcement on all dogs to instill a specific behavior.

When your Westie is not barking or hostile towards cats but is instead friendly and curious around cats, then you should reward them with a treat. This will build an association between the good behavior the Westie engages in and the dog treat that follows that desired behavior. With enough repetition and encounters with cats, Westies will automatically adjust their behavior and learn how to socialize with cats.

If you need some ideas for dog treats you can use, then consider these dog treats on Amazon. These treats are highly reviewed and Amazon’s choice for dog treats, so your Westie will not be disappointed. The next time your Westie encounters a cat, make sure to have some delicious dog treats ready to go so you can adequately reward him for his excellent behavior.

So, are Westies good with cats? Yes—but only if you are willing to put the time and effort to teach your Westie how to socialize with cats. The earlier you can introduce Westies to cats, the better, and if you can raise your Westie alongside cats, that is even better.

Westies are vibrant and intelligent dogs with a friendly personality, which are all helpful characteristics when it comes to getting along with cats. Positive reinforcement is one of the best psychological tools you can use to spur positive developments between Westies and cats. With enough training, Westies will not only be your best pal but perhaps your cat’s best pal too. Good luck!